Born in New York City just before the turn of the 20th century, Charles spent his youth reading deeply into the nascent field of particle physics. One day, while thumbing through a back issue of Electrical Review, he stumbled upon a description of burns suffered by Dr. H.D. Hawks of Columbia University during a medical x-ray demonstration. He became obsessed with the idea that an “as-yet-undiscovered” particle could expand the boundaries of non-invasive medical imaging beyond simple x-rays. He began a series of ill-advised experiments to discover anti-matter technology which could fulfill this need. With the help of his younger brother Carl, he built a cloud chamber in an abandoned warehouse in Brooklyn and began working with radioactive isotopes. His experiments became increasingly perilous and, unable to procure enough radioactive material to satisfy his appetites, he turned to questionable supplies from dubious sources. Despite his brother’s desperate pleas to stop, he continued on until one fateful night a shoddily constructed safety latch on the chamber gave way and it exploded in a blinding flash of radioactive light. Charles was never seen again after that night. Grief stricken, his brother left New York and travelled across the country to California where he completed Charles’ experiments, a work for which he received the Nobel Prize.

The accident robbed Charles of most of his physical body. He exists now in roughly humanoid form composed of matter that is not exactly baryonic. He has gained the ability to generate simultaneous sparks of matter and anti-matter from his palms and in combat he is able to direct the resultant explosion of energy towards his opponents with devastating effect.

Charles brings an interest in all things energy related to Classroom Colosseum including PET, MRI and CT scanning. He is currently deciding between pursuing a career in radiology or radiation therapy. 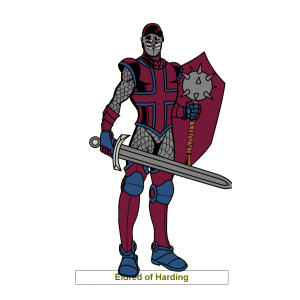 Eldred was born in the year 847 AD in Berkshire, England. The third son of a Saxon nobleman of the house of Harding, he was originally given a religious education at Cookham Abbey which included a great deal of medical instruction. However, he was forced to abandon this in 867 AD as his family fled the invading Viking hordes of the Great Heathen Army.

At the age of 19, he found himself at the court of King Ethelred of Wessex. Desiring a more adventurous lifestyle than the monastery provided, he used his father’s influence to gain a post as a cavalryman in the Saxon army under the command of the king’s brother Alfred, who would eventually become King Alfred the Great. In 868 AD, the Great Heathen Army under the Viking commander Ivar the Boneless pushed into Saxon lands and Eldred fought alongside Alfred to stall them at Nottingham. He distinguished himself at the Battle of Ashdown in 871 AD and quickly became one of Alfred’s most trusted allies.

By 872 AD Ethelred was dead and Alfred was king, but he was often troubled by chronic health issues. Eldred was able to use his medical training to minister to the king’s illnesses including the compounding of antibiotic ointments from garlic and cow’s bile. While wintering in the stronghold at Chippenham in 878, Alfred was attacked by Viking armies. Eldred sacrificed himself to allow Alfred to escape. Alfred got his revenge later that year in the Battle of Edington which saw the final defeat of the Great Heathen Army. After his death, Eldred was honoured by Alfred who saw to it that his medical remedies were preserved for posterity. They were eventually set down in the most pre-eminent Anglo-Saxon medical text known today, Bald’s Leechbook.

Eldred fights with the broadsword and mace. He is also skilled in the use of the lance and bow. He has a penchant for disabling his opponents, then mending them.

He has declared an interest in internal medicine with a particular interest in infectious diseases. He is currently debating the merits and drawbacks of sub-specialty training. 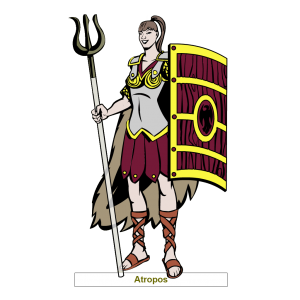 Atropos was born in 154 AD in a small Germanic village on the banks of the Elbe in the Kingdom of the Marcomanni. Her father pledged her to a tribal leader as part of a debt repayment while her mother was still pregnant with her. As such, she was named Gisila at birth. Throughout her infancy she was traded amongst various tribal leaders until she ended up in the household of Ballomar, the Marcomannic King. She was a precocious child and he greatly favoured her, so much so that she was given the peculiar honour of a rudimentary education. At the age of 10 she learned to read and write Latin and became quite useful during the Germanic negotiations with the Roman military governor Marcus Iallius Bassus. Much to Ballomar’s dismay, she was given to the Romans in 167 AD as part of a truce agreement. As the Marcomannic wars exploded she was shipped to Aquileia and imprisoned briefly as her foster father Ballomar’s army besieged the city.

When the Roman emperor Marcus Aurelius arrived in Aquileia around 168 AD he brought with him the Greek physician Galen. Impressed with her ability to speak German, Latin, and a bit of Greek, Galen requested that she be assigned to his service as a scribe and translator. In 170 AD Galen was released by the emperor and he took Gisila with him on his travels throughout the empire. Over the years he became another father to her and she learned all that he had to teach as she transcribed his notes. She learned surgery and anatomy as she assisted Galen with his numerous vivisection experiments. In 175 AD Galen went to Pergamon to visit the gladiators of the High Priest of Asia. He had served as their physician in his younger days. Gisila begged Galen to stay on with the gladiators after he left. She worked as their physician and in exchange they trained her to fight. She employed Galen’s teachings on hygiene, fitness, wound care, and surgical repair. While there she took the Greek name Atropos as she felt it better reflected her fighting spirit.

In 180 AD Galen summoned Atropos to Rome as he battled a new outbreak of the Antonine Plague. She travelled fearlessly into plague infested quarters of the city to catalogue symptoms and provide treatment. Unfortunately, she contracted the plague herself and succumbed.

Atropos carries an eclectic mix of weapons and armour reflecting her cosmopolitan existence. She fights with a trident, a skill she learned from a Thracian Retiarius. Instead of the usual arm and shoulder guards, she wears a Roman cuirass and carries a scutum. Her sandals are Greek, but she still carries the fur coat given to her by Ballomar and wears her hair in the traditional Germanic style. Her scutum is emblazoned with her family crest.

She decided on general surgery the first time the gladiators told her how Galen eviscerated an ape and then surgically repaired the damage as a demonstration of his superior skill.

Careful, she is known to coat the tip of her trident in belladonna! 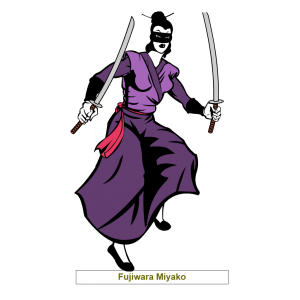 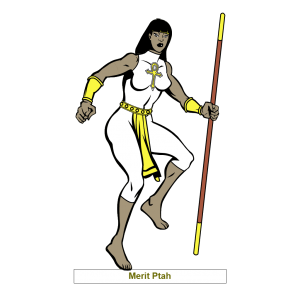 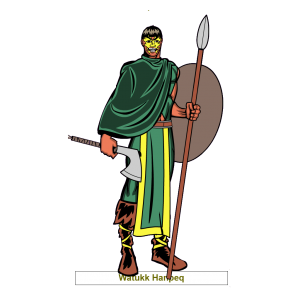